Why We Need 'Media Matters' for California


Media Matters for America is one of my favorite progressive web sites. If the Mainstream Media (MSM) publishes a smear of President Obama or congressional Democrats, Media Matters will fact-check the story and post a rebuttal within hours. Unfortunately, these days there are so many smears and so little time. And so, to paraphrase Mark Twain, a lie about the world outside Washington is beamed around the world at the speed of light before truth can get its browser open.

THE NEW YORK TIMES has been called the "best newspaper in America." My wife, Cathy Deppe, and I used to live in New York and reading the Sunday Times is bad habit I haven't broken. Alas, Sunday's magazine cover story on California was s-o-o-o bad.

Published in The New York Times Magazine, July 5, 2009.
Who Can Possibly Govern California?
by Mark Leibovich 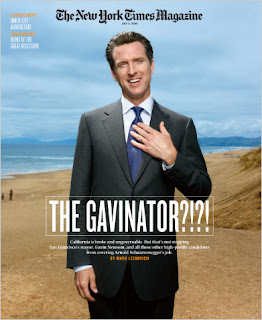 It's like celebrity fluff in People Magazine. Newsom's note-taking? Schwarzenegger's cigars? Brown's love for arugula? Whitman NOT owning a horse? My elementary school grandchildren could write a deeper analysis!

...the last time real life overwhelmed the state’s ability to govern itself — that’s when voters recalled their governor, Gray Davis, and once again looked beyond "reality," to Hollywood, for their next savior, Arnold Schwarzenegger.

Further down, Leibovich describes our budget problems in this way:

When the economy is booming, the stock market soaring and jobs abundant, relying on income taxes is not a problem. That was the case in the years after Schwarzenegger first became governor in 2003, and he was hailed as a “postpartisan” leader who cut taxes and appealed to Democrats by aggressively tackling issues like global warming. But in today’s cratering economy — in which California faces a decline in personal income for the first time since 1938 and unemployment sits at 11.5 percent — the state’s coffers have shriveled up quickly, along with the governor’s popularity.

The California economy was never "booming" and the stock market was never "soaring" at any time during the Schwarzenegger regime. California was in crisis throughout 2003, which is why Democratic Gov. Gray Davis faced a recall in the first place.

Leibovich parrots the conventional wisdom that California politics is hopelessly deadlocked between fanatical partisan ideologues "on both sides." And yet, he can write:

There is some consensus among people in both parties that Schwarzenegger has been genuine in his commitment to changing the system, particularly as it relates to fiscal policy. "He has done a very good job of getting the reform movement started," Poizner told me. Likewise, many Democrats say the governor has been more than sincere in his attempts to work with them (even hiring one of their own as his chief of staff). For the most part, though, Schwarzenegger is held up as the emblem of how impossible the job has become. He seemed to come in with every advantage — no debts to special interests, a nonideological orientation and a big, charismatic personality. "To see that he’s incapable of pulling this thing off suggests that you have a systemic problem, a governance problem," Newsom told me.

In point of fact, the three most powerful daily newspapers in the country: The New York Times, The Wall Street Journal, and The Washington Post, have all published ignorant, silly partisan junk about California lately. I am not shocked that it was printed. I am shocked by the fact that nobody cares. Gentle reader, that's why we need a "Media Matters for California" and every state in the union.

President Obama has bet the economy on his program to grow the government and finance it with a more progressive tax system. It's hard to miss the irony that he's pitching this change in Washington even as the same governance model is imploding in three of the largest American states where it has been dominant for years -- California, New Jersey and New York.

A decade ago all three states were among America's most prosperous. California was the unrivaled technology center of the globe. New York was its financial capital. New Jersey is the third wealthiest state in the nation after Connecticut and Massachusetts. All three are now suffering from devastating budget deficits as the bills for years of tax-and-spend governance come due.

These states have been models of "progressive" policies that are supposed to create wealth: high tax rates on the rich, lots of government "investments," heavy unionization and a large government role in health care.

The Washington Post, May 3, 2009.
"No More California Dreaming" by George F. Will

Under Arnold Schwarzenegger, the best governor the states contiguous to California have ever had, people and businesses have been relocating to those states. For four consecutive years, more Americans have moved out of California than have moved in. California's business costs are more than 20 percent higher than the average state's. In the past decade, net out-migration of Americans has been 1.4 million. California is exporting talent while importing Mexico's poverty. The latter is not California's fault; the former is.
. . .
Liberal orthodoxy has made the state dependent on a volatile source of revenue -- high income tax rates on the wealthy. In 2006, the top 1 percent of earners paid 48 percent of the income taxes. California's income and sales taxes are among the nation's highest and its business conditions among the worst, as measured by 16 variables directly influenced by the Legislature. Unemployment, the nation's fourth-highest, is 11.2 percent.
. . .
But what actually ails California is centrist evasions. The state's crisis has been caused by "moderation," understood as splitting the difference between extreme liberalism and hyperliberalism, a "reasonableness" that merely moderates the speed at which the ever-expanding public sector suffocates the private sector.

How long, O Lord, how long do we have to endure this "Big Lie" that California is a high-tax state? In an opinion piece published by the Los Angeles Times, Jean Ross of the California Budget Project directly addressed "The Myths of California's Tax Systems"

WTF does George F. Will mean by writing that California "is exporting talent while importing Mexico's poverty" ? I guess he means California is losing "White People Like Us" while gaining "Those People Like Them." But excuse me, I forgot. The only "racists" left in America today are "liberal" advocates of affirmative action. George F. Will has been obsessed with "race" for forty years, but he is not a racist. He's just a "conservative."

Why shouldn't the MSM write junk about California for a national audience? They know no no one is going to call him on it and most of California's big-league "progressive" activists are too busy worrying about East Jerusalem and the West Bank of the Jordan to give a damn about what's happening in East L.A. and the West Bank of the Sacramento River.

For the WSJ to call New York state government 'liberal' and 'progressive' comes off as a sick joke, especially from a paper located in NYS. What is progressive about a state so gerrymandered that politicians are more likely to die in office than to lose an election? What is progressive about a legislature that the Brennan Center called 'Stalinist' and 'the most dysfunctional in the country'? And let's not forget that Governor Paterson tried to close the budget gap by nickel-and-diming us all, instead of raising taxes on the rich. Mind-blowing that the corporatists, after destroying the US economy, are still trying to blame everything that goes wrong on progressives who have never even been in the driver's seat.