Dear Green Friends,
The time has come for Green Party activists to get ready for the 2012 California elections. One thing we will need are good cartoons, caricatures, graphics expressing the issues in California highlighting the contrast between the Green Party and the 2 Titanic Parties.

The graphic below is from the lead story of the Black Agenda Report, America's leading web site for news, commentary, and analysis from the Black Left. I think this graphic exquisitely expresses the growing revulsion among many African-Americans like me, with the smugness of Democratic Party "Obamamaniacs."

Posted on The Black Agenda Report, September 21, 2001
Barack Obama VS Those Craaaazy Republicans: Is He the Lesser Evil, or the More Effective Evil?
By Bruce A. Dixon, BAR managing editor and a state committee member in the Georgia Green Party Of course, Bruce Dixon is writing for a national audience. In my opinion the most important mission of the California Green Party is to build an independent progressive force at the state and local level -- especially in the One-Party Democratic coastal cities.

What we need for inner-city Los Angeles campaigns are the services of a graphics artist to produce a similar graphic substituting images for Governor Jerry Brown, Senator Diane Feinstein, and Los Angeles Mayor Antonio Villaraigosa for the image of President Obama. 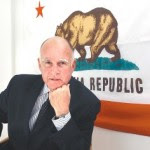 Mayor Antonio Villaraigosa
If you can help me. Please leave a comment here or e-mail me directly at:
AlexCathy@aol.com.

I can help. Please explain what you need!