Do "minority kids" do poorly in school because "those people" don't have a high enough regard for education? You know you've heard variations of this argument about a 1,000 times. The L.A. Times published a story that I personally found poignant on a number of levels. 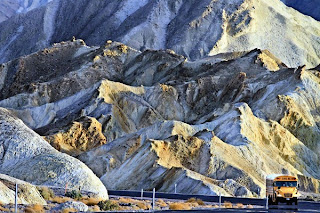 A school bus carries students from Death Valley High School in Shoshone to a Native American village in the national park. (Irfan Khan / Los Angeles Times / January 10, 2012)
California has pulled funding for school transportation for the rest of this fiscal year and may eliminate it entirely next year. In Death Valley, where some students have a two-hour round trip, the cut is 'catastrophic.' ... It is 6:54 a.m. Marlee, a 14-year-old with raven hair and red nail polish, climbs aboard. She is one of nine students who spend more than two hours riding this bus 120 miles every school day to and from the Furnace Creek area to their school in Shoshone...

The long distance and light passenger load make this bus ride exorbitantly expensive. The Death Valley Unified School District spends about $3,500 a year for each of its 60 students on home-to-school transportation — compared with about $26 per student in more densely populated districts, according to data compiled by the California School Boards Assn.

So when Gov. Jerry Brown announced that lagging state revenue would require eliminating all school transportation funding for the rest of this fiscal year, it hit this tiny school district harder than just about any other in California. Death Valley Supt. Jim Copeland calls the cut, which took effect Jan. 1, "catastrophic."

For students like Marlee, the issue goes way beyond dollars and cents. The bus is her lifeline from the desolation of the desert to a wider world of teachers and friends, school sports and art projects and academic stimulation.

"School is the highlight of my life, and we can't get to school without the buses," Marlee said after a recent morning ride.

Educators statewide have decried the busing cuts as particularly unfair to small and rural districts that shoulder disproportionately high transportation costs. They are scrambling to reverse the move with legal action, letter-writing campaigns and legislative lobbying. Some are arguing that if cuts have to be made, they should be distributed equitably across the state ...

Of course, Governor Brown, like all the Democrats and Republicans in California, is playing games. The object of his game is to convince California voters to approve his retro tax plan. Meanwhile, he talks big about "investing" in big ticket projects for California's future [Translation: shoving a lot of money into programs favored by particular interests joined at the hip to the Democratic Party Machines].

There is no lack of criticism of California's once great system of public education. The problem is that most criticism comes from the so-called "conservative" side of the aisle. While everybody is busy obsessing over Barack Obama Democrats versus the barbaric Republicans we are in for another rough ride in 2012 at the state and local level in California.

Good post, Alex. I forwarded it to the ruralgreenbusiness list at yahoogroups. So much for those who say that there are no uniquely Rural Green Issues and denied the recognition of a rural green caucus in GPUS.

Great effort it is and so proud that it was such a successful event. And I think the expense was worth it.