Check this conversation between Amy Goodman and Richard Wolff.

Instead of obsessing over sex and "race" this should be the focus of "The Left" in the USA today.

RICHARD WOLFF: I think what Syriza shows in Greece is the potential of a mass popular resistance, not only to the austerity policies that came in after the crisis of 2008, but even to the very basic system of the countries of Europe that divide people into a tiny number of very wealthy and a mass of poor, that the system is producing outcomes that more and more people are hurt by, are critical of and want to change. But the conventional politics, the Republican and Democratic parties here and their equivalents all across Europe, don’t see it, don’t act on it, don’t even speak about it. So it becomes a kind of a vacuum, where there’s no political expression of what a growing mass of people feel, both about austerity and about capitalism as a system. And so it’s like a solution into which you drop that last little bit of hard material and everything crystallizes. Everybody is waiting for the new political voice to emerge that speaks to and represents what the traditional politics have failed to do.


Bernie Sanders is doing that in this country, and he’s doing it very well, exactly like Syriza surprised everybody. Indeed, in England, there’s a struggle going on right now inside the Labour Party, where a candidate like Bernie Sanders, named Corbyn, is surprising everybody by the support he’s getting inside the struggle for who will be the new leader of the Labour Party. So you see everywhere the signs of an emerging left wing, not because of some political maneuver, but because of the enormous vacuum that a left leadership can take advantage of, given what has happened in the last eight years of this capitalist global system.


AMY GOODMAN: How does Bernie Sanders compare to Hillary Clinton?

RICHARD WOLFF: Well, she’s the old. She is the staid, do it by the books, the old rules, as Paul said so nicely. She is playing the game the way the game has been played now for decades. Bernie Sanders is saying the unthinkable, saying it out loud, saying it with passion, putting himself forward, even though the name "socialist," which was supposed to be a political death sentence—as if it weren’t there. And he’s showing that for the mass of the American people, it’s not the bad word it once was. It’s sort of a kind of position in which the conventional parties are so out of touch with how things have changed, that they make it easy for Mr. Sanders to have the kind of response he’s getting. And my hat’s off to him for doing it.

RICHARD WOLFF: Well, that’s a big one. Socialism has traditionally meant one thing, but it’s changing, as well. Traditionally, it meant that instead of private ownership of means of production, of factories and land and offices, you socialize it. The government takes it over. And instead of having bargaining in the market, buying and selling goods to one another, we work from a governmental plan. So it gives the government an enormous power. But the idea was, if the government owns and operates the businesses, and if the government plans how we distribute goods and services, it will all be done more democratically, more egalitarian, etc., etc., than capitalism. That was always the idea. The problem was, socialists have to admit, that giving the government that much power raises a whole new set of problems, which the Soviet Union and China and so on illustrate. So the question is: Are there other ways of understanding socialism that gets us the benefits without the negatives? And I think the new direction is the whole focus at the enterprise level, of changing the way we organize enterprises, so they stop being top-down, hierarchical, board of directors makes all the decisions, and we move to this idea which is now catching on: cooperation, workers owning and operating collectively and democratically their economy and their enterprise.

Unfortunately, Ms. Hillary Clinton is not the only one in USA politics representing "the old... the staid, do it by the books...  playing the game the way the game has been played now for decades." The same thing can be said of the old activists and intellectuals who dominate Our So-Called Left in the USA. They have lived their whole lives playing the game of single-issue "Identity Politics" for decades. And just like mainstream Republicans and Democrats our "Lefty" leaders "don’t see it, don’t act on it, don’t even speak about it."
Posted by Alex Walker at 7:31 PM No comments:


The USA was founded by wealthy men who wanted to have independence from other rich men in Europe. They did this so that they would have the freedom to act in any way they wanted to enrich themselves further. But the rest of us are not free of these ruthless free men since they violate the rights and boundaries of those beneath them. Until we the majority of the population are free of their tyranny then we have nothing to celebrate. 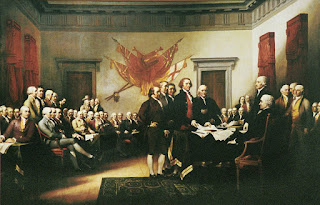 Such views are not uncommon on "The Left" in the USA. Thus, every thanksgiving, we note that many of our Indigenous brothers and sisters call Thanksgiving a "Day of Mourning". In my African-American community, we remember the July 1852 speech by the great abolitionist Frederick Douglas: "What to the Slave is 4th of July?" as if nothing has changed in the USA in the last 163 years.

In my humble opinion, we should remember and honor the revolution of 1776 as exactly no more... and no less... than it was. Yes, it was a no more than a "bourgeois" revolution of wealthy White men. But it was no less than the overthrow of kings, state church, and the nobility of what was then the world's most powerful empire.
Thinking About Our Thinking in 2015

I strongly believe that both "liberal" Democrats and "conservative" Republicans in the USA are incapable of grasping our unprecedented global crisis of the 21st Century.  I am a Green Party man willing to publicly declare that our 10 Key Values of the 4 Pillars of Green Parties around the world are superior... yes, superior... to the thinking of the "Old Liberals" and the "Old Left."

The Four Pillars of the Green Party are a foundational statement for many worldwide Green parties as a future oriented movement based on the practical experience and wisdom of labor, civil rights, and peace movements.

The "Old Liberals" talk a good game about "the environment" to appeal to their base of educated middle-class voters. But they refuse to "connect the dots" between environmental issues and social justice. The "Old Left" has never really believed in nonviolence. My "Lefty" friends cherish the old dream of bloody, violent revolution. Never mind that in the USA violent radicalism is more likely to resemble the fascism our Left leaders fear than the revolutionary socialism  they say they want. Finally, one shocking thing is the general contempt of "Our Leaders" from Left, Right, and Center to democracy. They claim to speak for "The People" but their speeches, writings, and Internet posts and tweets are dripping with contempt for "The People" whom they regard as lazy, "dumb", rascist, sexist, fools.

Give the people strong, independent progressive alternatives. Then, we'll see  who is the fool.