One Party with Two Names: Our Grinning 'Leaders'

Screw the Poor, the Frail, Kids, Students, and the Environment

So why are these "leaders" grinning? 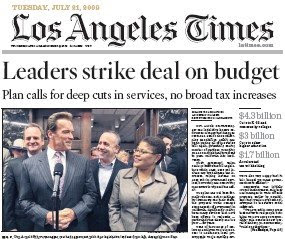 Maybe because they are "leaders" of California's One-Party-with-Two-Names?

"In dragging out the dickering and pushing California dangerously close to insolvency, Democratic legislative leaders insisted that they were protecting the safety net, knowing all the while that they were fraying it at the local end. They had few options, and it would be foolish for rank-and-file legislative Democrats to reject this budget based on the depth of the cuts. It's just that a little more candor about the limited nature of Californians' choices is in order.

That goes tenfold for Schwarzenegger, who insisted that the additional three weeks of parrying was an attempt to fix the state's structural problems once and for all. Nonsense. No once-and-for-all resolution was available. Despite the fantasies of would-be reformers, government cannot be remade in a few weeks during the middle of an economic disaster, a fact proved by the kick-the-can budget just announced. The real work comes over a period of months and perhaps years, as Californians turn their attention -- as they must -- to remaking our tax structure and reinventing our government."

"Using veto power to rule out any tax increase, Gov. Arnold Schwarzenegger and Republicans guaranteed that the budget would be balanced by deceit and billion-dollar accounting gimmicks, like shifting the final payday for state workers to the next fiscal year. Like the Democrats, most Republicans didn't want to suspend Proposition 98 on school funding; they just didn't want to honestly fund it.

Instead of passing an oil production tax that many states already levy, California will grant new leases for drilling off Santa Barbara — if Schwarzenegger has his way."

"It is built on a base of billions of dollars in temporary tax increases approved in February and scheduled to expire in 2011, and temporary federal aid that is due to disappear even sooner. On top of that shaky foundation, legislative leaders and the governor have built a rickety house of borrowed money, shifted funds and old-fashioned gimmicks."

"But whether the budget is approved tomorrow or in two weeks, it is essential that Schwarzenegger keep demanding reform in his final 17 months in office. His initial focus should be pushing hard for a two-tiered government pension system to reduce obligations to new hires. He should also continue to seek fixes to CalWORKS so that welfare reform can finally arrive in California.

But his broader focus should be on making the case as forcefully as possible that it's time for a new mind-set in Sacramento. For too long, the state has been run as if it were a jobs program, not a provider of essential services. This is why from 1997 to 2007, the number of jobs paid for entirely or largely by the state increased by nearly one-quarter, to 895,000.

It's time to roll back this huge growth. The idea that this will result in severe problems is a union-promulgated myth. All one has to do is look at the productivity revolution in the private sector in job areas that are essentially the same as in government: procurement, record-keeping, claims and payroll processing, inventory management and housing."

Cry of the Oppressed and Betrayed

Governor Arnold Schwarzenegger and his horde of retrograde Republican lawmakers got everything they wanted in a horrific bargain with Democratic legislative leaders that has ended (for the time being) California’s budget impasse. Not only will there not be a single cent raised for the state by taxing oil or tobacco, Schwarzenegger and the Republicans privatized $1 billion from the workman’s compensation insurance system, gutted all levels of the education budget, pauperized state workers with a third "furlough" day each month, raided the coffers of local governments, and even gave away the first new oil-drilling leases off the Santa Barbara coast in 40 years...

Perhaps the most irresponsible aspect of the latest budget deal between Arnold Schwarzenegger and the Republicans and State Assembly Speaker Karen Bass (D-Los Angeles) and State Senate President Pro Tem Darrell Steinberg (D-Sacramento), is that it utterly fails to deal with the structural nature of California's budget deficit, relying instead on one-time accounting maneuvers and the preservation of unnecessary tax breaks for multinational corporations that virtually guarantee the reemergence of future deficits.

The latest plan jettisons $2 billion of taxes on oil companies and alcohol producers supported by voters in favor of almost $16 billion worth of new cuts to education, health care, and social programs...
. . .
Schwarzenegger, the Republicans, Bass, Steinberg, and any other Democrat who votes for this budget plan will claim that they had no choice, that circumstances forced them to make these cuts to balance California’s budget.

Posted on the Web Site for the Western Center on Law & Poverty, July 24, 2009.
Legislature Guts The Safety Net
by Mike Herald

The Assembly just passed AB 8 4X by a vote of 44-21 to concur in Senate amendments that make historic changes in the state's CalWORKs program. The bill was supported by 18 Democrats and 26 Republicans. 20 Democrats and 1 Republican (Tran) voted no. The bill now goes to the Governor where he is expected to sign the bill.
. . .
But the damage done by AB 8 4X is extreme. The bill guts the safety net for the most vulnerable families by reducing children's grants for the first time in the history of the CalWORKs program. Grants will be reduced by 25% from a maximum of $566 a month for two children down to $420 a month if the parent can not comply with federal work requirements. These are parents who are either can not work legally or who have used up the 60 month time clock but are still so poor their children qualify for assistance. In reality, for most of these families they will see their grants reduced. Advocates implored Democratic legislators to not accept these cuts, particularly to immigrant families because politically it is nearly impossible to ever restore these benefits.
. . .
It is shameful, disgraceful and one of the lowest moments in the history of social welfare in California. It is deeply offensive to hear Democratic leadership claim to have "saved the safety net" or that they will undo this in the future. They will never have the votes to restore CalWORKs and they should stop trying to deceive the public about the harm they have done.

What is To Be Done? Reboot California Politics

Democrats also voted YES to the CalWORKs deal that eliminates COLAs for years to come. This time provision, inserted in the bill and ignored by the media so far, insures that a "cost of living increase" is gone forever by requiring a 2/3 majority vote to pass all future COLAs. See the Western Center For Law and Poverty for "the rest of the story."

This is an incredible, heartless giveaway by our "one party" system.

I definitely do not like the idea that our legislators balanced the budget at the expense of the poor and marginalised. However, was there another way to produce a balanced budget that would have passed both the State Assembly, Senate, and Governor's desk?

Thank you Alex for the info in the posting.
Congratulations to Cathy for digging deeper.

Anonymous said...
This comment has been removed by a blog administrator.
3:59 AM