2 Cal Democrat Scandals - Why Have a Green Party?


Consider the Los Angeles Times front page below. Not one, but two major scandals rocked the California Democratic Party in the same week.
UPDATE: SCROLL DOWN TO SEE LIST OF DURKEE CAMPAIGNS 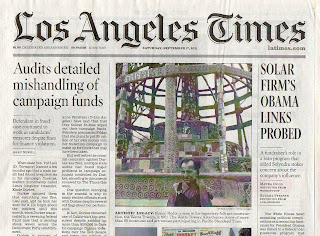 Thanks a lot Democrats. Why have a Green Party? Tell me again how we don't need Greens, Peace & Freedom, Libertarians, and the A.I.P. because we have this great "choice" between "liberal" Democrats and "conservative" Republicans. 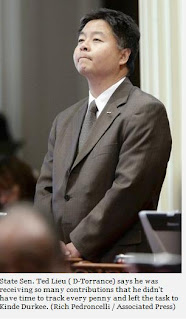 Durkee assured them that everything was fine, Lieu said, and he took her word for it. He forgot about the incident until this month, when Durkee was arrested in a sweeping federal fraud case that is sending shock waves across the Democratic Party establishment.

Durkee is accused of stealing perhaps millions of dollars from her clients, who include dozens of prominent California Democrats. Authorities have not laid out the full scale of the alleged crime, but clients including Rep. Loretta Sanchez (D-Garden Grove) and Sen. Dianne Feinstein (D-Los Angeles) have said that that they believe Durkee wiped out their campaign funds. Feinstein announced Friday that she plans to put $5 million of her own money into her reelection campaign to make up for funds that may have been taken.
. . .
"Politics in both parties is an old boys and old girls club, and most of the candidates … figure if everyone else is using Durkee, she must be all right," said Dan Schnur, director of the Jesse M. Unruh Institute of Politics at USC. "If you were the only campaign thinking about hiring a person with this record, you might think twice about it, but there's safety in numbers."

In Lieu's case, an audit by the State Franchise Tax Board found that $186,190 in credit card contributions to his unsuccessful 2010 race for attorney general had not been deposited in the campaign bank account, in some cases for well over a year. An additional $161,964 that was reported as having been transferred from Lieu's Assembly committee to his attorney general campaign in December 2008 was not deposited until two years later.
. . .

By Matea Gold and Stuart Pfeifer

Reporting from Washington and Los Angeles—
The White House faced mounting political complications as a second top fundraiser for President Obama was linked to a federal loan guarantee program that backed a now-bankrupt Silicon Valley solar energy company, and as two California lawmakers called for investigations of a state tax break granted to the firm.

Steve Spinner, who helped monitor the Energy Department's issuance of $25 billion in government loan guarantees to renewable energy projects, was one of Obama's top fundraisers in 2008 and is raising money for the president's 2012 reelection campaign.

Spinner did not have any role in the selection of applicants for the loan program and, in fact, was recused from the decision to grant a $535-million loan guarantee to Solyndra Inc. because his wife's law firm represented the company, administration officials said Friday.

But Spinner's role as a top official in the Energy Department program, which had not been previously revealed, is likely to spur new inquiries into whether political influence played a role in the handling of the "green" energy fund. Solyndra faces a congressional probe, a criminal investigation and separate internal inquiries at the Energy and Treasury departments.

The largest investments in Solyndra were funds operated on behalf of the family foundation of billionaire George Kaiser, another major fundraiser for Obama in 2008. Kaiser has denied personally investing in the solar energy company or talking to White House officials about the loan.

Before its collapse, Solyndra was a showcase of the White House initiative to develop clean-energy alternatives. Obama visited the factory in May and praised Solyndra as a green technology company that would create jobs and help lead the country's economic recovery.
. . .


The point is this. Even when so-called liberal Democrats in California want to do the right thing, such as promote alternative green energy, the implementation is all wrong. They just cannot help turning it into something that can feed the Democratic Party Machines and its rich campaign contributors.

It is instructive that one of the Democrats biggest campaign contributors is billionaire George Kaiser, with a direct interest in the national healthcare debate. Our Green Party candidates in Assembly District 53 strongly advocated universal, single-payer heathcare. But they didn't have to get permission slips from fat cat campaign contributors.


Posted on the Web Site for the Sacramento Bee, September 4, 2011
'I've been robbed,' California Lawmaker Says
By Dan Smith

See a list of all the state campaign committee reports Durkee filed in 2011, according to Secretary of State's office data.

Cluelessness and Courage in AD 53

No Taxes! No Worries! Be Happy!