It seems that one of the stories of the week is that fact that some politicians have discovered Twitter. While I have my own ID on both Twitter and Facebook, there is a side of me that wants to pull away from using Twitter at all.

I was going to write something a bit more serious on this subject, but it is hard to be serious after listening to John Stewart and Brian Williams take twitter to task on The Daily Show recently. Williams does not tweet because he doesn't think that what is he doing right now is very important.

Electronic media is very good at connecting people to events as they happen. Television news can catch on to relatively minor things and put us all in the middle of events with a great sense of presence. At it's best, it can make us feel the impact of those events in a way that print journalism can rarely do. Yet for all of the immediacy, it is images such as this that remain seared into the memory years later. Still images, captured for ever. 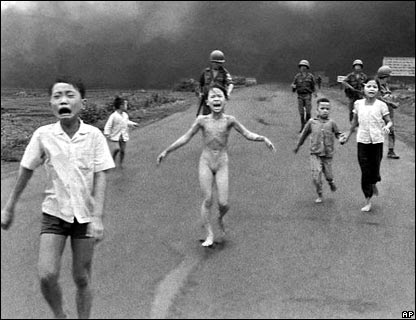 The phenomenon we call social media has a similar effect, only amplified. The more we know, the more detailed picture we get of what anyone is doing at any point in time, the less likely it is that the event so capture, so described, so broadcast to followers, will have any lasting importance. As we become inundated with things that we care little about, as in the following that I received when I checked this AM.

What is missing is the process of selection, of deciding what is important and how that important event, thought, image should be put in context to help all of us understand something about the world we live in. I find myself turning more and more to print journalism to get this because it is not coming from the internet nor is it coming from television.

I really did not elect any official to spend time and energy tweeting. I elected them to be legislating, to be thinking about what we need to do to improve this country. What we learn is that Arlen Spector was a lonely Republican when he applauded one of Obama's points in his speech to Congress. (Courtesy of a Claire McCaskill tweet).

I guess it is time to say "Frankly, my dear, I don't give a tweet."